The Shelby Township Board of Trustees’ unanimous award of an industrial facilities tax exemption certificate to Fori Automation on Oct. 6 formalized an agreement by the community and company to reinvest in one another.
The 12-year agreement paves the way for a new 156,536 square-footworld headquarters for the international advanced manufacturing firm and roughly $100,000 in annual township tax dollars and 52 new jobs for the community. 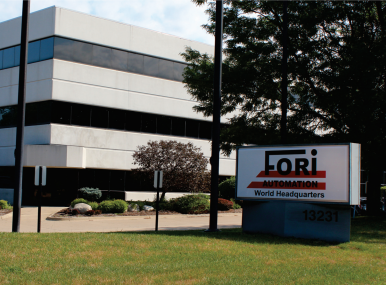 “We are very appreciative of the tremendous investment Fori Automation has made in our community over the years, and even more appreciative of the tax dollars they add to our bottom line,” Township Supervisor Richard Stathakis said. “Fori Automation epitomizes the drive and innovation that has made this country great, and it’s an honor that they call Shelby Township home.”
Fori Automation opened in Shelby Township in 1984 and generates approximately $85 million in annual U.S. sales in designing and manufacturing automated systems for aerospace, automotive and defense industries. Along with the Shelby Township base of
operation, Fori also has facilities in Korea, China, India, Germany, South Africa, Brazil and Mexico. Largely because of the company’s growth in the aerospace industry, it needs to move from its 72,353 square-foot facility on Wing Drive to a new location at 13231 23 Mile Road.
“Fori is renovating a 23-year-old facility with a proposed real property investment of $3.6 million,” Township Assessor Matt Schmidt said. “The project includes renovating all of the facility’s office space and two major sections of high bay manufacturing areas.”
According to Schmidt, Fori’s total investment in the community is approximately $12 million through land and building acquisition, as well as new equipment and renovation for and to the facility. The board’s tax abatement only covers Fori’s investment of $3.6 million in real property.
In its application to the Board of Trustees, Fori cited a desire to stay in metropolitan Detroit because more than 70 percent of its purchases are from Michigan-based suppliers. It also says that the company’s team of 189 current employees “have been dedicated to the growth of the company.”
Following the award by the board, Camille Silda from the Macomb County Planning and Economic Development Department said Fori’s
commitment to the community goes beyond jobs and its bottom line.
“Once a year for the last three years, Macomb County has played host to National Manufacturing Day, and Fori has been involved since the beginning,” Silda said of Fori’s annual hosting of high school students interested in learning more about the advanced manufacturing field.
“They get rave reviews from the school district, and (Macomb County Executive Mark) Hackel visited their facility this year, and he gave rave reviews. They are truly a fantastic asset to Shelby Township.”