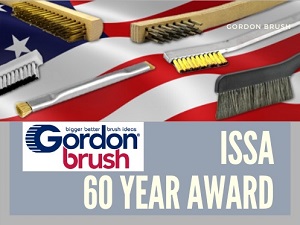 Gordon Brush's 122-year-old brand, Milwaukee Dustless Brush, received ISSA's Diamond Anniversary Award at the 2019 ISSA CONVENTION, that was held at the Las Vegas, Nevada convention center on November 19-21. The award was presented to Ken Rakusin, President and CEO of Gordon Brush by John Garfinkel, former Executive Director of ISSA. "Ken, on behalf the entire ISSA Association, we would like to thank you for your continuous support for the past sixty years", said John Garfinkel.

"Sixty years is a long time. We are honored to be recognized by ISSA for our continuous support of the world's leading cleaning industry's trade organization", said Rakusin. "The ISSA organization has been instrumental in helping us grow our business over these last 60 years by providing us with current industry information and the ability to network with other industry professionals and companies in the janitorial industry. The Member Spotlight article, A Sweeping Success Story, written by Graeme Golucki, that appeared in June/July issue of ISSA® Today, provides a snapshot of the Milwaukee Dustless Brush/Gordon Brush story and how ISSA has been a valuable resource to us", added Rakusin.