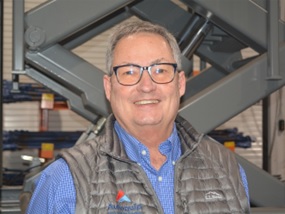 Guthrie, OK - After a successful and accomplished career, Louis Coleman, Sr. Director of Sales and Marketing at Autoquip Corporation has announced that he will retire from Autoquip at the end of September 2023.

Louis joined Autoquip first as a consultant and then moving into a permanent role as Director of Sales & Marketing where he has been advancing the company’s upward growth for the last 22 years. He will leave a legacy of innovation and excellence.
“His commitment and dedication to our company has been unmatched, as he provided the worldly leadership that has been essential for our growth,” explained Chris Kuehni, Autoquip President & GM.

In reflecting on the past 22 years, Louis shared that he has truly enjoyed being a part of growing this company into one of the premier lift manufacturers worldwide.

“I’ve had a great and challenging time with Autoquip and in the Material Handling Industry.  Autoquip has progressed from a small, unprofitable, standards lift company to a profitable, larger company manufacturing fully integrated lifting solutions.  We now sell to the largest and most demanding customers in the world.  I leave behind a company better positioned, a company capable of continuing to grow, and a company who can continue to redefine itself as the market and customer’s demand,” commented Louis Coleman.

“Louis has played an invaluable role in developing our company’s efforts across all markets and applications —most notably in special projects, integrated systems, advanced lifting systems and controls in all major industries.  Louis has brought an increased level of strategic vision and professionalism to Autoquip.” said Kuehni

“Over his tenure, Autoquip has become a leader in innovative lifting solutions, integrated systems, and projects while partnering and selling to some of the largest companies in the world. Louis took us there with his relentless worldwide, big picture focus, and in turn, Autoquip has developed countless long-term relationships with many key industry partners.”

Louis will remain in his position through September of 2023 as he works to mentor and transition his position and responsibilities over to the future leaders of Autoquip.  “I highly respect our customers and our employees a great deal.  For this reason, my succession will be accomplished professionally and in a manner that assures a seamless transition.  All our coming announcements will insure this to also be the case,” said Coleman.