Chicago, IL – Nord-Lock has released the X-series washers that are built to combine Nord-Lock’s own wedge-locking protection against unprompted bolt loosening. Bolt loosening is caused by many stresses including settlement and relaxation, vibration, and dynamic loads. The X-series washer contains an exclusive spring effect that protects against any slacking from taking place due to settlement and relaxation. This combination is unique and it makes the X-series the first ever true multifunctional solution that leaves no room for compromise.

Previously there had been no solutions on the market to protect from bolt loosening caused from varying disturbances. This left designers with the difficult decision of whether spontaneous bolt loosening or slacking will lead to the biggest effect on any given joint and selecting a solution for that single issue. With the release of Nord-Lock’s X-series, there is no need to compromise as total bolt security and simplified design and maintenance is what the X-series delivers. 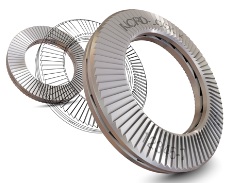 Just like Nord-Lock’s original washers, each washer pair has cams on the side and radial teeth on the opposite side to secure the bolted joint with tension instead of friction. The X-series washers’ conical shape creates an elastic reserve in the bolted joint to compensate for the loss of preload and prevent slackening. “Since we work closely with our customers we can react to the trends in application design, and this product is the result of our goal to design a system that would eliminate insecurity. When you cannot say with certainty whether spontaneous bolt loosening or slackening would be the bigger issue or when both could be equal ricks, there is now a solution on the market” says Maxime Thonnerieux who is the Development Director of the new product.

The Nord-Lock X-series was officially released at the InnoTrans exhibition in Berlin during a live broadcast. Praise has already been well received from participants of a select early adopter group and clients who have immediately ordered the product after its global release.

To see how the X-series washers add a new dimension of safety to security please visit the Nord-Lock X-series Video or by visiting the Nord-Lock Website.