While mirrors are typically used to get ready in the morning, scientists have developed a mirror that has more high-tech applications, which could eventually lead to improvements in future solar technology. According to a report in the The Optical Society's journal Optica, the researchers were able to use the magnetic properties of a metamaterial to perform the remarkable feat of reflecting infrared light. 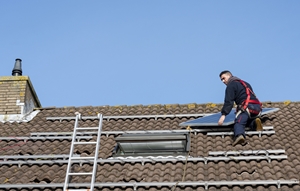 These magnetic mirrors could prove useful in retaining the electrical signature of light that touches the mirror due to the object's nanoscale cube-shaped resonators.

Michael Sinclair, co-author on the Optica paper and a scientist at Sandia National Laboratories, called the magnetic mirror technology a new milestone in research.

"We have achieved a new milestone in magnetic mirror technology by experimentally demonstrating this remarkable behavior of light at infrared wavelengths," Sinclair said, according to The Optical Society. "Our breakthrough comes from using a specially engineered, non-metallic surface studded with nanoscale resonators."

Solar applications of magnetic mirrors
?Metamaterial mirrors in optolelectronic devices also appeared in the June issue of Nature Nanotechnology. The authors of the study said that a magnetic mirror can enhance the interaction between light and matter. These types of emerging devices could eventually make up the new wave of solar power generation technology.

The magnetic mirrors in the experiment described in Optica may be used to harness the sun's energy to make new solar cells or could also advance lasers, according to The Optical Society. The Nature Nanotechnology study also noted that the light absorption and photocurrent generation in a model solar cell could see an estimated 20 percent improvement through this device.

Growth in solar industry
In the second quarter of this year, solar PV installations increased 21 percent compared to the same period last year to reach 15,900 megawatts, according to the Solar Energy Industries Association. Although the industry has faced challenges that may have slowed down growth this year, SEIA said it expects this year will be a strong one for companies.

"Nevertheless, the first half of 2014 showcased innovative financing strategies, evolving utility business models, and solar's increasing economic competitiveness with fossil fuels, all of which offer encouraging signs of the U.S. market's ability to weather barriers to growth and further push solar PV into the mainstream," SEIA said in a solar market insight report for Q2 2014.

As the development of solar technology advances and cost of solar power decreases, this renewable energy source will likely represent more of the energy mix in the U.S. and other eco-conscious countries. Overall, SEIA believes 2014 will see massive growth in the solar industry.

With magnetic mirrors' potential for the solar industry, scientists are encouraged by the performance of these devices and are looking forward to seeing whether they can find more applications for this technology.

"Our results clearly indicated that there was no phase reversal of the light," said Sheng Liu, Sandia postdoctoral associate and lead author on the Optica paper. "This was the ultimate demonstration that this patterned surface behaves like an optical magnetic mirror."