InfoCommerce Report: The Dark Side of Pay-Per-Click 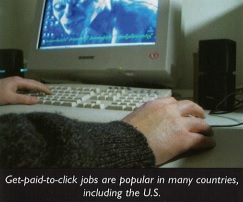 A number of people suspected it, but there was never any proof. But now, investigative reporting by The Times of India, India's largest English-language newspaper, has confirmed that it really exists: a small army of individuals in India who are paid to sit at their home computers and click away on specified banner ads and sponsored links. These individuals are getting paid per click because the advertisers behind these links are pay ing for every click -- legitimate or not.

According to the article, shady intermediaries have sprung up, paying these individuals an average of about 20 cents per click, and keeping a commission for themselves. The articles cites http://www.click2freemoney.com/ as one such intermediary (be careful if you take a look -- the site forces you to download Gator ad software onto your computer -- wonderfully ironic!), and also notes that you can easily find these intermediaries by using search engines (even more irony!) (try entering the search term "earn rupees clicking ads" on the Indian version of Google.

The big question the article doesn't answer is who is supporting all this illicit activity. If you “follow the money," there are only two groups that would seem to profit from click pumping: search engine optimization consultants and services, and the PPC program operators themselves. ICR won't speculate as to who may be involved, but the more important point is that link pumping is a real and growing issue.
Commentary: PPC has been online advertising's golden, unstoppable business model of the last few years. It's enormously seductive to advertisers, because PPC would seem to shift the advertising risk to the PPC program operator, and no money changes hands unless the advertiser gets results. Of course, this all depends on honest operators, and it seems there are at least a few bad apples out there who may well call the entire business model into question.
Of course, advertisers' own lack of vigilance is allowing this illicit activity to exist. ICR has heard from many advertisers, agencies, publishers Is this good news for and others who are openly bemused by the fact the PPC programs can draw many thousands of clicks for even the most obscure companies and specialized products. Just as telling, virtually none of these clicks can be traced to orders, and rather than researching the issue, most of those involved simply In the short-run, it will rationalize it away.
Underlying this unwillingness to say that the emperor may have no clothes is the current and pointless focus on developing site traffic at all costs. The common mantra from both advertisers and publishers is that "more traffic is better.” It's as if popularity has suddenly become more important than profits. People now use site traffic as a measure of success, and nobody seems interested in whether this traffic is qualified or evenb legitimate. However, the entire basis for B2B publishing is delivering small numbers of highly qualified leads, something that has been forgotten as we all chase quantity at the expense of quality.
Can link pumping be stopped? Actually, tools exist to tell you who's behind your paid referrals and where they are located geographically. Don't look to the PPC companies to do this for you: their general stance is that they don't care who's behind the clicks. In other words, caveat emptor rules in PPC advertising. Is this good news for advertising-based online directories? In the short-run, it will be compelling and satisfying to pull out this article to show to prospects who think PPC is all they need. In the longer-term, however, illicit activity like this damages everyone who sells online advertising.