Three channel Vector leak tester can save your garage floor!

If you’ve been in the market for a home at some time and have considered an older, well cared for house, say something built in the ’70s did you notice the oil spots on the garage floor? Growing up in the seventies one of the joys of independent teenage travel a.k.a car or motorcycle ownership was taking care of your machinery. Some of us were better than others and appeared to know what to do, the rest just winged it. But one thing we all knew how to do was to put newspaper or “spill-dry” under the leaky bits. No big deal. It didn’t mean there was anything wrong with the motor or transmission – they all leaked. Just keep a can of oil in the trunk. 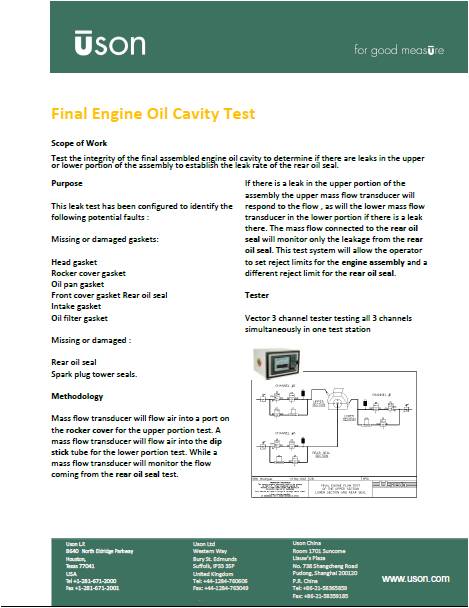 Can you imagine that nowadays? My neighbor’s home has a garage floor that would shame the smartest restaurant! This brings me to the subject of this week’s post, the engine oil cavity leak test.

The purpose of the test is to verify the integrity of the final assembled engine oil cavity, checking for leaks in the upper and lower portions and to establish the leak rate of the rear oil seal. Although it sounds simple, this is a complex test which when properly configured will identify the following faults if they exist :

To save time and minimize real estate requirements for the system, all three tests are performed simultaneously.