Our President & CEO, Ken Rakusin was the recipient of the PATRIOT AWARD at the 2019 MADE IN AMERICA CONVENTION 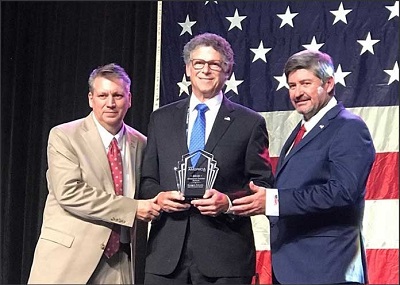 CITY OF INDUSTRY, CA – Ken Rakusin, President & CEO of Gordon Brush Mfg. Co., Inc. was the recipient of the PATRIOT AWARD at the 2019 MADE IN AMERICA CONVENTION , that was held at the Indianapolis, Indiana convention center on October 3-6. "This award was presented to Ken for his Proud To Be An American™ attitude and his unwavering commitment to manufacturing in the United States, in-spite of the infiltration of low cost, inferior Chinese goods", said Don Buckner, founder, MadeInAmerica.com .
In addition, Buckner presented Gordon Brush® with the ARMED FORCES AWARD and commented, "On behalf of Made In America .com  we commend you for your patriotism and extraordinary efforts in developing the "Chamber" brush, for the Abrams tank, that saved the United States Army, $1.5 Billion."
"I am overwhelmed, honored, and deeply humbled to receive these two prestigious awards. My goal was to make a difference for our employees, our customers, and our country. I guess we achieved that", said Rakusin.
"I want to thank Don and his team for recognizing our accomplishments. Gordon Brush is Proud To Be An American Manufacturer™ and a GOLD sponsor of the 2019 MADE IN AMERICA convention", added Rakusin.