ST. GEORGE – For managers at recent St. George move-in Industrial Brush Corp., their new home has been a breath of fresh air.

After 38 years operating out of Pomona, California, the company made a move to Utah to take advantage of more business-friendly tax and regulatory rules, as well as lower utility and operating costs. 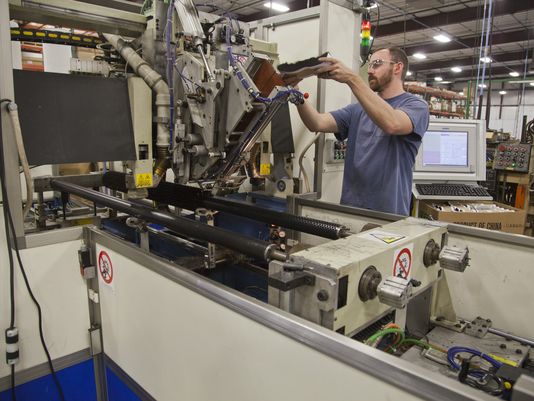 For a company that has prided itself on attracting good help and convincing workers to stay on-board for the long haul, it also helps to have a lower cost of living for employees, company President John Cottam said

"We're basically paying the same salaries, which is what we can afford, but here it allows people to buy a home and raise a family," he said. "Part of this was for the continuity of the company, wanting to attract the type of employees you want to attract."

It's a sentiment that a growing number of businesses have been expressing in the past year, with Washington County's industrial base slowly making headway despite at least one major setback.

The St. George City Council is scheduled this week to finalize the creation of a new Community Development Area in the Fort Pierce Industrial Park, making businesses within the area eligible for tax incentives and potentially encouraging new companies that officials hope will create steady jobs that pay above the area's average wages.

In the first quarter of 2014, Washington County's average weekly wage was $578, compared to the Utah average of $831 and the national average of $1,027, according to the Bureau of Labor Statistics.

That amounts to little more than $30,000 annually for the typical Washington County job, and area officials have for years been trying to drag that number upward, using incentives to lure higher-paying companies or convince existing companies to expand.

If companies can meet certain criteria, including the creation of jobs that outpace Washington County's median income, they can earn back a portion of any new property tax revenues they create.

Industrial Brush is one of two businesses that have already worked out deals as part of the CDA, agreeing to hire at least 23 full-time workers at 175 percent of the area's average wage. As long as they meet the demands, they could recoup up to 80 percent of new property tax revenues over the next five years.

Nearby Environmental Stoneworks, which manufactures and installs stone veneers, has been offered a similar incentive that would pay back 50 percent of new taxes created over the next five years in exchange for hiring at least 61 full-time workers at 135 percent of the average wage.

Companies like those either moving in or expanding into Washington County helped to keep the area's industrial sectors moving in a generally positive direction, said Scott Hirschi, director of Site Select Plus, the area's primary business recruitment and economic development agency.

The Fort Pierce Industrial Park includes more than 100 buildings on more than 1,500 acres, with some 130 tenants.

As of mid-year, the latest figures available from the Department of Workforce Services indicated manufacturing jobs were up 8.5 percent in 2014 compared to 2013.

In early September, Fort Pierce lost one of its earliest major tenants, with Blue Bunny Ice Cream announcing it would be closing its production facility there, costing the area some 100 jobs.

But later that same month, global glass manufacturing company Viracon announced it would be returning to St. George, vowing to hire some 300 employees and investing more than $2 million in new machinery at its plant in the Fort Pierce area.

As other companies have come and gone, the growth has remained steady, Hirschi said.

"I, in no way, want to downplay the impact that Blue Bunny had, especially for those who worked there," Hirschi said. "But we have well over 50,000 jobs in Washington County, so percentage-wise it doesn't have a very significant impact."

Utah was recently included in the Top 10 list for states with economic development organizations by the American Economic Development Institute and Pollina Corporate, which looked at 32 different factors ranking how attractive states were making themselves to new business.