It’s been said that necessity is the mother of invention. From the perspective of Douglas “Skip” Perry, he saw the need so he got right to work creating the Smart Reacher. Initially, Skip and his wife would struggle opening and closing the plantation-style wooden shutters that were installed high up in their living room’s vaulted ceiling. If they wanted to let more light in or close the shutters completely, moving the louvers into a different position would be cumbersome since the shutters were so high along the wall. He asked the installer if he had any suggestions to more easily open and close the shutters, but he had no ideas that would make things easier. That is until Skip thought about the problem in more depth and came up with the Smart Reacher This would allow them to easily reach the windows— but that wasn’t all it would be able to do. The Smart Reacher vertical/horizontal appendage was designed so the buyer could screw it into place on any standard extension pole. Also, Skip’s idea placed “Notch-Cuts” on the front and back as well vinyl covers to preserve delicate features.

Coincidentally, Skip’s son, Matt, is a mechanical engineer, and he just conveyed what he wanted and it was designed in CAD. The first iteration was made from aluminium but it would have been too expensive to mass produce, so, naturally, molded plastic was the alternative. 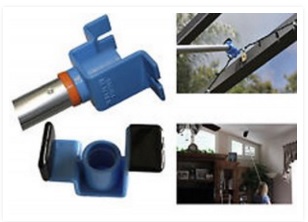 Before he contacted ICOMold, Skip received quotes as high as $14,000 for 1,000 pieces from other injection molding vendors. Also, he was pleased that ICOMold did not require a minimum purchase like other mold shops that he contacted.

“I found ICO on Google and they were very friendly and helpful right off the bat. We had to do a little back and forth about the thread because on the first prototype there were some issues. So, I had my son redesign the thread and the second prototype was perfect. ICO’s quality was outstanding! Plus using the ABS [plastic material] made it affordable. ICOMold even followed up to see if things were okay after shipment.”

The Smart Reacher has a multitude of uses and is available on Amazon.com, eBay.com, and directly through their website at:  www.smartreacher.com.