Ball slide assemblies that provide nearly friction-free performance help keep a popular line of eyeglass frame tracers on track. Frame tracers need to follow the outline of an eyeglass frame while applying only a tiny amount of pressure on the frame to avoid distortion. At the same time, the high duty cycles under which many of these machines are used creates the need for a very reliable mechanism. National Optronics, Inc., Charlottesville, Virginia, solved both of these problems at once by specifying virtually friction and maintenance free ball slide assemblies from Del-Tron Precision, Inc., Bethel, Connecticut.

National Optronics manufactures quality machinery, which is used to process plastic lenses in both surfacing and finishing areas of an optical laboratory. National Optronics is the only company that manufactures all three major pieces of equipment required to produce eyeglasses: frame tracers, edgers and generators. This machinery is based primarily on dry cutting technology. Dry cutting technology offers the advantage of eliminating the use of hazardous chemicals and the equipment required to treat waste produced by wet cutting systems.

3-D tracing
The company’s Saturn NP Tracer is designed to trace the outline of a frame, pattern or lens and generate the geometric information used to mill the outer contour of an eyeglass lens. The Saturn NP tracer incorporates 3-D tracing --- in other words, it has a vertical encoder to compensate for the frame not being laid flat. It has 2000-count encoder resolution, which provides the ultimate in accuracy. Finally, the tracer provides a newly designed frame holder, which provides far-easier loading and expanded accuracy. The tracer is also offered at a remarkably affordable price. 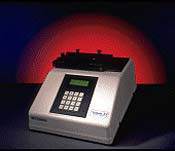 Basically, the tracer works as follows. The operator loads the frame into the machine with one eye, normally the right, placed over the center of rotation of the tracer. Some companies trace both eyes sequentially and others feel that only one eye is sufficient. The operator then puts the stylus of the trace into the groove of the frame and presses go. Then the stylus rotates around the frame through 360 degrees while a spring pushes the stylus firmly into the groove and three encoders record its position with respect to three axes, r (radial), z (vertical) and (rotational). The actual trace takes about 6.5 seconds. The machine generates a computer file containing the three-dimensional geometry of the frame ready for loading into a patternless edger that machines the outer perimeter of the eyeglasses. Many companies use a network to transfer the information from the tracer to the edger.
Design challenge
The most difficult challenge faced by the engineers that designed the new tracer was the mechanism that provides the stylus with translational motion. This mechanism needed to operate virtually without friction since any drag runs the risk of distorting the frame, which would provide incorrect geometry. Another potential problem that could occur with a high-friction mechanism is the stylus falling out of the frame groove and failing to complete the trace. In addition, the tracers are used on a nearly continuous basis in some optometry labs so the mechanism has to be capable of operating without maintenance for long periods of time. After examining a number of different linear motion devices, National Optronics engineers selected a pair of Del-Tron ball slide assemblies, D-3 for the z axis and S-1 for the r axis.

These ball slide assemblies offer extraordinarily low friction because they use linear ball bearings. Much more commonly used rotary ball bearings have a higher coefficient of friction because the peripheral track is shorter on the inner race than on the outer race, causing the ball to skid on one or the other. Linear ball bearings run exactly equal distances on the > pair of tracks in linear bearings, permitting the balls to run without friction, wear, or skidding at any preload. The typical coefficient of friction for Del-Tron ball slides is 0.003.

Low maintenance requirements
Del-Tron ball slides require exceptionally low levels of maintenance because they are lightly lubricated during assembly, and are self-cleaning in normal service. Additional lubrication is not required, except for applications involving speeds above 1800 inches/min or continuous high loading. When used at the rated load capacity and moderate speeds, a life of 10 million inches of travel can be expected. The expected life at one half the rated load is 100 million inches.
At the same time, the ball slide assemblies also provide exceptionally high accuracy, which is also important in this application. They provide accuracy of 0.0005" per inch of travel and repeatability of 0.0002"', making it possible to meet the critical accuracy requirements of the application. This is measured by comparison of the line of travel to a master straight edge, using a gage or indicator mounted on the slide. The mounting surfaces of the ball slide are machined flat and smooth, and parallel to each other and the line of motion.

Del-Tron Precision began operations in 1974 supplying original equipment manufacturers with the world’s first commercially available subminiature ball slide. Since then, thousands of Del-Tron ball slides have been incorporated into medical analyzing and testing machines, semiconductor processing equipment, computer peripherals, assembly systems, scientific instruments and many other machines. Del-Tron’s modern corporate campus boasts highly automated computer controlled equipment and final inspection of 100% of all products has been Del-Tron’s policy since its inception. For more information, contact Del-Tron by phone at 800-245-5013, by fax at 203-778-2721 or by email: deltron@deltron.com