Robots and other automated machinery have played a significant role in changing manufacturing and the processes that make everyday consumer products. The future of robotics is even brighter as companies develop innovative processes to improve these transformative technologies. Recently, scientists at Harvard University have discovered a method to build devices using magnetic levitation instead of robots to physically hold onto objects, BBC News reported. With powerful magnets and magnetic materials, manufacturers could produce goods without making contact with materials that could easily break in the clutches of robotic arms. 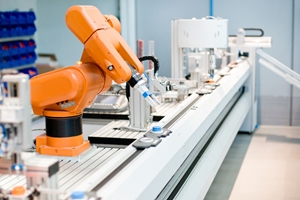 The market value of the global robotics market is projected to reach $20.2 billion in 2016, after growing an average of 10.5 percent each year between now and the end of this period, according to market research firm The Freedonia Group. New advancements in robotics could change how manufacturers handle and assemble parts.

The surge in demand for soft robotics made with grippers made with silicon have given way to magnetic materials to develop noncontact manufacturing processes.

Anand Bala Subramaniam, from Harvard's Department of Chemistry and Chemical Biology, told BBC News that while magnetic levitation has been utilized to separate materials, the team's research focuses on manipulating objects with the same forces. The scientists are testing their theory by building a device filled with magnetic fluid.

Process of magnetic levitation
In a video description of the process using magnetic levitation, scientists are able to suspend a screw in a magnetic liquid. They use two external magnets with one at the top and another at the bottom of the device. Through this fluid that is attracted to magnetic fields, manufacturers can modify and eventually even build objects that are not magnetic with magnetic levitation.

"The magnetic force acts as an 'invisible gripper' that holds the screw in place," according to the video description. "This property allows the screw to be manipulated and rotated simply by rotating the MagLev device."

The process allows researchers to suspend objects that are lighter than the liquid itself. Subramaniam is working on future applications for magnetic levitation and advancing robotics-controlled assembly.

"The next step that we need to take is to put more than one object [in the chamber] and try to assemble them in the liquid," said Subramaniam, according to BBC News. "For this, you need a more complex configuration of magnets and control algorithms to bring in an object, orient it, then bring in another object, orient it and attach it to the first."