Shark barrier made with permanent magnets designed to curb attacks

While magnets are known to repel when similar poles face one another, marine conservationists are making a splash by using permanent magnets to repel sharks. 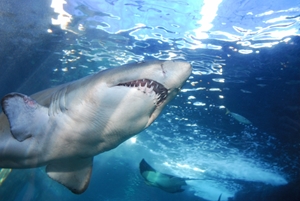 Craig O'Connell, founder of the marine conservation non-profit O'Seas Conservation Foundation, created the shark repellant device known as the Sharksafe Barrier, Mashable reported. The device works by integrating permanent magnets and plastic to look like a kelp forest. While the kelp itself is unsuspecting, it has the power to repel some of the largest species of sharks in the world, including the great white and hammer head sharks.

The U.S. experienced a total of 47 shark attacks in 2013, a decrease compared to the 2012's 54 incidents, according to the University of Florida's International Shark Attack File. George Burgess, curator of the file at the Florida Museum of Natural History on the UF campus, said there were 10 fatalities stemming from shark attacks around the world, with the deaths mainly occurring in Western Australia and the southwest Indian Ocean. Scientists have been trying to develop ways to stop sharks and people from interacting.

"When scientists study sharks and develop more information about how they move and why they attack, it allows us to recommend measures that reduce the chances of sharks and people meeting," Burgess said in a statement. "One-on-one in the ocean, the shark has the advantage. But, by better understanding where and when it is safe to be in the ocean, we can better avoid those encounters."

The Sharksafe Barrier could be an effective method to stop sharks from going near people.

O'Connell, lead author of a paper published in the Journal of Experimental Marine Biology and Ecology in 2013, told Discovery News that the stimuli helps prevent sharks from entering an area. Unlike the effect the barrier has on sharks, other marine life, such as Cape fur seals, can pass through the barrier.