XIMEA made the next step in bringing unique Thunderbolt-enabled cameras to industrial and scientific users. First model in the line was formally certified and can now enter into range of other standard product camera lines offered by XIMEA. More models with new high quality sensors are in the process. 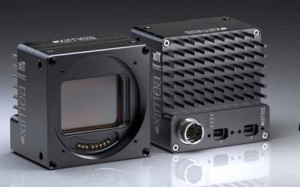 First prototype units of Thunderbolt-enabled cameras from xiT line were presented by  XIMEA on the Vision 2014, showcased on Intel Development Forum 2015 in summer and further tested during multiple Thunderbolt™ Plugfests. XIMEA camera had to undergo strict and rigorous testing done by independent laboratory and respective officials.

The final outcome ensures smooth and seamless compatibility with other Thunderbolt certified products and approves XIMEA to ship MT200 model with Thunderbolt Trademark and Logo for PC and Mac.

MT200 is equipped with industry proved 20 Mpix sensor CMV20000 from CMOSIS. Full resolution of this CMOS sensor with Global Shutter at 30 frames per second and 12 bit per pixel can be achieved thanks to the Thunderbolt™ 2 bandwidth of 20Gbit/s and without the need of any frame grabbers. Camera itself is further enhanced with the active EF-mount interface for control of dynamic aperture and focus. Dual-port Thunderbolt 2 facilitates daisy chain interconnection, which can reach up to 60m distances with fiber optics cables.

Other models in the certification pipeline are equipped with newest Sony’s CMOS sensors based on Pregius technology.