The Evolution of Stainless Steel 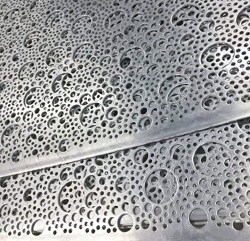 The evolution of stainless steel officially began just over 100 years ago. In 1913, Harry Brearley (1871-1948) was experimenting with alloys to find a way to protect rifle and gun barrels from corrosion. In the process, he discovered stainless steel. He originally named it “rustless steel” because this material would not rust or corrode. Brearley then discovered that identical cast deemed perfect for crafting cutlery. Earlier efforts of this similar alloy were made. However, Brearley is credited with inventing the first true stainless steel we still use today.

Chromium Is Key in the Evolution of Stainless Steel

What’s the key ingredient in Stainless steel? Chromium! Brearley found a resistance to oxidation to steel when he added 12.8% chromium content to melted iron. Chromium produces an invisible and adherent oxide layer of film on the surface of the steel. This is the "passive layer" because it heals itself in the presence of oxygen. Hence, this is what gives stainless steel a bright, shiny appearance.
Historically, chromium ore was known as Siberian red lead. This was used to make bright red paints. In the late 1700’s, French chemist, Louis-Nicolas Vauquelin (1763-1829) discovered chromium while heating the red lead with charcoal. He observed a bright, shiny material and named this substance Chromium. For that reason, he chose Chromium from the Greek word “Chroma,” meaning “color.” Chromium is a very important characteristic towards the evolution of stainless steel.

Evolution of Stainless Steel in America

Production in stainless steel steadily increases every day around the world. Architects and engineers appreciate stainless steel’s sustainability component. Most noteworthy, there is no shortage of innovation when it comes to stainless steel! Our Project Managers acknowledge this and take on revolutionary, complex projects. Indeed, they solve problems and suggest solutions for cost effectiveness and collaborative design. Stainless steel is popular here at Astro. Nevertheless, we fabricate stainless steel almost everyday. You will see stainless steel and its many applications, including:

In the meantime, contact us today if you’re looking for knowledge and experience in fabricating stainless steel. We’d love to help!