The military has, for decades, been the real push behind the developing titanium industry. Its needs has driven developers to find new alloys, new applications, and new processing methods in order to lower costs and design better, safer, and more reliable equipment. Even the aerospace industry wouldn’t be where it is without the military pushing for new and better alternatives.

Military applications require materials that can stand up to some extreme conditions, and there is always a challenge to balance strength and durability against affordability and weight problems. Over the years, titanium has slowly replaced steel in a lot of components, and it continues to be a go-to option in every branch of the military. 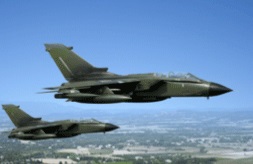 How Titanium Took Over
Titanium has been in commercial use for decades, but in 1947 there was still only around two tons of titanium produced every year in the United States. Over the next year, though, the U.S. government started realizing how important this metal could be for aircrafts, spacecrafts, missiles, and other military purposes, so it began to fund new endeavors. 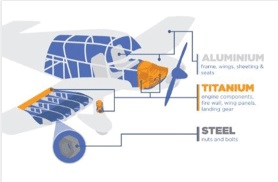 This was the first time the government got involved financially, scientifically, and politically with a structural material. So, by 1953, the annual production of titanium had increased to more than two million pounds.

By the time the 60s rolled around, titanium was well established in the commercial market, but it was still the material of choice for the military. In today’s industry, around 73% of titanium metal in the U.S. is used for aerospace construction, but there is still a lot of it going to new developments and military applications.
Putting It to Use
The lightweight, strong, and anti-corrosive properties of titanium have made it a valuable resource in almost every branch of the military.

Navy - Since salt water has almost no effect on titanium, it is used in propeller shafts, underwater manipulators, rigging, and other parts that come into frequent contact with the sea. Titanium is also found in submarine ball valves, heat exchangers, fire pumps, exhaust stack liners, and shipboard cooling and piping systems. Previously, the navy saw a lot of seawater pipe deterioration in heat exchangers and had to replace the copper-nickel pipes quite regularly. Titanium offered a way to improve the component lifespan and reduce costs.
Air Force - Aerospace (whether commercial or military) has been the biggest adopter of titanium for decades. The metal is used in airplane frames and bodes as well as other components like landing gears, brackets, wing access panels, and more.
Titanium can operate in temperatures greater than 1112°F (600°C) which makes it a great choice for jet engine castings and compressor discs where the high temperatures would crack and fatigue most other metal alloys.

Military aircrafts tend to use even more titanium alloy in their components than are found in commercial aircraft. In some models, up to 25% of the jet may be comprised of titanium.

On the Ground - Titanium is being tested for its feasibility as armor on tanks and personnel. It is already being used in personnel carriers, ordnance, and other applications. Armor plating seems to be one of the more important elements, though, because titanium is lightweight and shows some resistance to ballistic attack.

There are several important characteristics that make titanium such an appealing option. 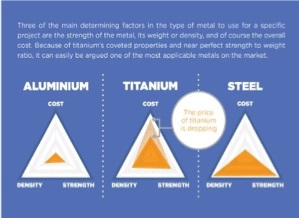 The Right Alloy for the Job

Military applications may use different alloys for different jobs, depending on the specific requirements. Ti-6A1-4V is generally considered the right alloy for armor applications, because it has the best ballistic performance, but there may be reason to choose something else.

Titanium is easily alloyed with different materials, and the most common choices for military uses are aluminum, vanadium, and tungsten. These alloys make the metal ideal for everything from structural parts to hydraulic systems.

Alpha alloys are not often seen in these applications because they cannot be heat treated to develop higher mechanical properties. Alpha-beta alloys, on the other hand, combine strength and ductility while remaining heat treatable.

Different grades of titanium may be used in different applications, depending on the individual characteristics.

Where Is It All Going?

As military and aerospace industries continue to look for more affordable solutions that allow them to develop lighter, stronger, and more reliable vehicles, titanium will remain the most popular option.

Cost and weight limits have hindered development in the past, but titanium’s characteristics provide an opportunity to get past many of the traditional limitations on things like engine components and structural capacity.

Military developments have always led the way in the titanium industry, pushing for new and better ways to process and use the material. The consumer market will continue to follow and benefit from the new developments in the industry.